Our family had talked about camping off an on in past years as both my wife had been camping as children with our parents.  My past was mostly in tents and cabins while my wife's family had a few trailers.  For reasons still unknown to me, 2018 was the year I said let's get one, and nobody said not to.  We started off with a 2019 Grand Design Imagine XLS 21BHE.

We used this camper more than we thought we would.  This was one of my biggest worries in getting one, the outlay of money without getting the value out of it.  Fortunately the family had a fond memory from the previous year when we borrowed my parents' pop-up to go see the eclipse in Nebraska, so we were off to a good start.  As it turned out, this was a good camper in that everything just worked as it was designed.  We did not have any return trips to the dealer, or problems with any of the systems for the time we had it.  We simply learned that a different layout would work better for the 4 of us, so we ordered a 2400BH from Grand Design customized with the theater seating.  The camper comes well equipped, but anyone that has one knows there are minor things to do to make it your own--your own house on wheels.

A disclosure before we get into the modifications:
Links on this page to products at Amazon are affiliate links. They do not change the price to you, but they do help me out. Please use them if you find them to be handy.

The first thing to be modified was replacing the switch for the outside awning LEDs.  Those things are just amazingly bright.  We learned this lesson with the 21BHE that has the same LED strip.  When it was energized, the site was well illuminated, but it was like putting up a billboard for every bug in the campground to stop by and see what we were having for supper.  The remedy for this is a high-quality 12v dimmer that fits in the place of the factory switch with a custom 3D-printed insert that can be found at this link on Thingiverse. I liked the ability to control the brightness so much that I installed one for the inside lights as well.

We did not get vent covers on the first camper.  Having had many times when they would have been very nice, we had added those right away, on all 3 vents.  We also upgraded the main cabin fan to a Fantastic Fan and fitted a Fanmate cover over that one as well. 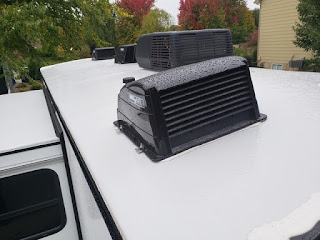 Another thing we learned when camping with the first trailer is having cell signal at most campsites is unusual, and often it doesn't matter who your carrier is. Fortunately we did find a device to solve this problem. 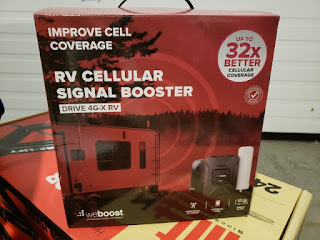 The WeBoost really works well if a signal exists and is weak. If it does not exist at all, you are still disconnected though.


The first time I saw a fireplace in a camper, I was amazed.  Things were passing through my tent camping mind like, "so this is what camping has become".  It was not very long after owning a camper that I knew I had to have a fireplace though.  I managed to do a little research and found a nice small, self-contained fireplace that would fit on the lower shelf of the cabinet across from the theater seats.  I put some 3M grip tape on the bottom of it so it won't slide around, and by gosh, it actually works very well, looks neat and provides heat even. If you have not explored the wonders of grip tape for things in your camper, it will amaze you. Oh yeah... the fireplace can be found here. 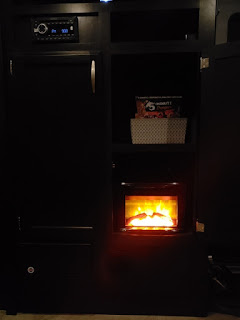